We haven't included this topic yet on our own website, but we're happy to let PlantWhateverBringsYouJoy.com beat us to it! Local author Kathryn Hall visited us recently to check out straw bale gardening by our resident gardener Marie. 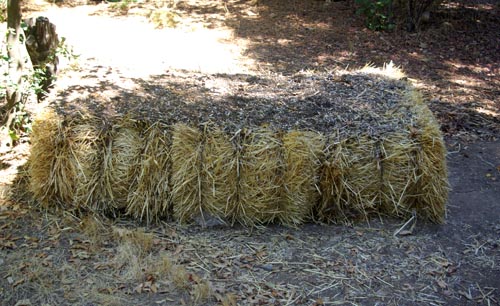 Pesticides and wine – a study from Europe

Now and then we'll post interesting news for you from the world of organic wine and organic agriculture. The following is from CCOF Magazine, Spring 2009 Issue:

"The Pesticide Action Network-Europe conducted a study of pesticide residues in European wine and found that on average a conventional bottle of wine contains four pesticides (one bottle in the study contained ten detected residues, while all bottles contained at least one). In comparison, the organic wines tested contained almost no residues (one residue was detected in one bottle). Grapes are one of the most contaminated crops in Europe and elsewhere, and the problem is growing in the wine industry as many farmers opt for synthetic pesticides. These pesticides are not fully removed in the winemaking process, as this study and a 14 year study conducted by the French Ministry of Agriculture have both shown. Organic wines are virtually pesticide free, as organic farming requires alternative pest control methods."