The NOSB voted: no added sulfites in Organic Wines

A big thanks to all of you who took the time to petition the National Organic Standards Board (NOSB).  The board voted and they agree with you:  sulfites have no place in organic wine!

With a 9-5 vote a few weeks ago, the NOSB rejected the petition that would have allowed sulfites, a synthetic preservative, into USDA certified organic wine for the first time.  The petition would have allowed the addition of up to 100ppm added sulfite to organic wine despite the fact that organic processing laws expressly prohibit the use of synthetic preservatives.  You helped to educate the policy makers about the quality and popularity of truly organic wines!

Non-sulfited winemakers banded together to advocate truth in labeling and to reject the watering down of organic standards.  Representatives from several certified organic wineries gave public comment.

Thanks again to all who voiced their opinions.  The large volume of public comments were crucial in keeping synthetics out of wine and other organic products.

Following is a press report issued after the vote:

The National Organic Standards Board (NOSB) voted to uphold organic wine standards. They rejected the petition requesting the use of the synthetic preservative sulfite in organic wine.

Paul Frey, President of Frey Vineyards in Redwood Valley, CA states, “The preservative sulfite has never been allowed in any organic food that carries the USDA organic seal.”

John Schumacher of Organic Wine Works in Felton, CA remarks on the overwhelming consumer support expressed at the meeting and that "the decisive 9-5 NOSB vote was very gratifying."

During the months leading up to the NOSB meeting there was a huge outpouring of consumer support declaring the importance of truth in labeling and denouncing the addition of sulfites, a synthetic preservative, to organic wine. The Organic Consumers Association gathered over 10,000 signatures, and of the 484 comments posted on the USDA NOSB site, over 80% opposed the petition.

Schumacher sums up the victory by bringing it back to the health of the consumer: "Consumers can continue to choose award-winning USDA organic wines with no sulfites added.”

Steve Frenkel, owner of the New York distribution company Organic Vintages declares, "I am elated that we have prevented the proposed rule change which would have caused much confusion resulting in consumers being easily mislead and misinformed.  Instead, I am very happy to report, this victory has insured the continuation of clear, honest, and forthright labeling of organic wine."

Harvest 2011 was an exciting one for North Coast grape growers here in Mendocino County, California.  Two large rainstorms in early October got growers scrambling to harvest the fruit as quickly as possible.  Our picking crew worked under gray skies during the day and at night under a Harvest Moon, successfully bringing in our entire crop in record time.  The cellar crew worked overtime to process such large volumes.  But then it cleared up and the vineyards dried out, allowing us to harvest less frantically during the final stretch.  The pressing is finished now and the wines are put to bed for the winter as they complete malolactic fermentation.  Mendocino County weathered the storms and we anticipate some great wines despite the challenging harvest.  Look for the first of our 2011 white wines in early 2012! 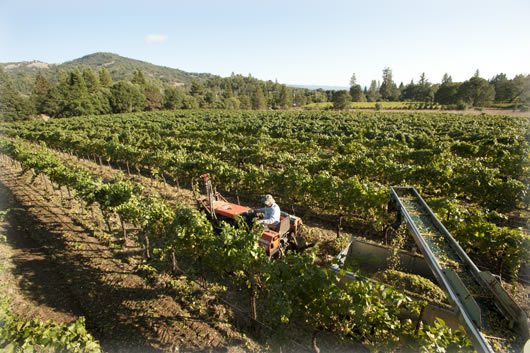 Learn in 3 minutes how to pair Frey Organic Wine with fine cheeses!

Barrie Lynn at the Cheese Impresario has some great tips to share with you on pairing your favorite Frey wine with fine specialty cheeses.  She pairs Frey Organic Chardonnay with mouthwatering Gruyère, Frey Organic Sauvignon Blanc with some creamy goat cheese, and Frey Organic Cab with aged cheddar.  Try one of the combinations at your next holiday party!  The videos can be found here on YouTube.

We are thrilled to have completed the 2011 pressing of our Frey Ranch sunflower and grape seed oils, a part of our ongoing experimentation in local food production. After the red wine fermentation the grape seed was separated from the pomace, sun dried, then pressed. The grape seed oil is deep and complex with a distinct grapey flavor. The sunflowers grew quickly over the summer months and were easy to harvest with our mini-combine, which also harvests the grain crops from the vineyards. The fresh-pressed sunflower oil is new for us and a delicacy, with a rich, nutty aroma. Both are delicious oils for salads or drizzled over roasted veggies. Our seed-oil press is made in Germany and can accommodate a wide range of seeds, from grape to sesame. So far we have only experimented with grape seed and sunflower seed but we look forward to testing more oils in the future, as well as offering some of these oils, and the grains, to our customers. Stay tuned! 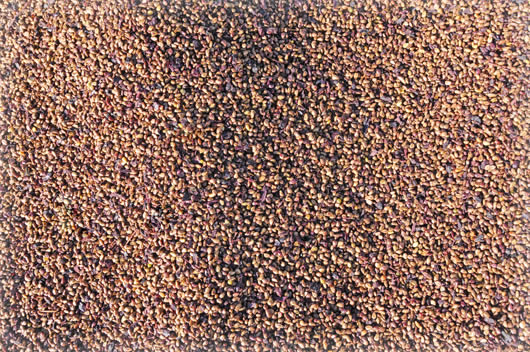 This recipe for a classic holiday fruitcake is lightly sweetened with real honey and the fruit is soaked and simmered in Frey Organic Dessertage Port. It's easy to make and certainly will disappear quickly at your holiday party! I use organic ingredients whenever possible, to help organic farmers and the planet. 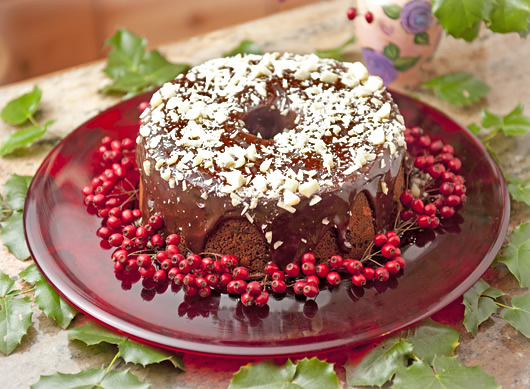 In small saucepan, combine the apricots, figs, and Frey Organic Dessertage sweet wine.  Simmer until wine is almost boiled off, which takes 10 to 15 minutes.  Set aside to cool.  In large bowl beat the butter with electric beater until creamy.  Add honey and beat until blended.  Add eggs (or vegan egg-replacer) one at a time, and beat well after each addition.  Add vanilla and mix that in.  Set aside.

In a large bowl mix together the flour, baking soda, salt, cinnamon, ginger, nutmeg, cranberries, almonds, and walnuts.  Then gently mix in the apricots and figs by folding. Spoon it all into the buttered (or oiled) angel food cake pan.  Bake approx. 50 minutes or until a knife inserted into center comes out clean.  Let it sit 15 minutes, then extract it out of its mold onto a cooling rack.  While it cools, bring the cream to a simmer (for vegans, skip to the next step).  Add the chopped chocolate.  Let melt a few minutes.  Stir, then let it cool but not so much that it cannot pour out.  Place the cake on serving platter, pour over the chocolate sauce, then garnish with the chopped macadamia nuts.  Surround with pine boughs or other seasonal decorative. 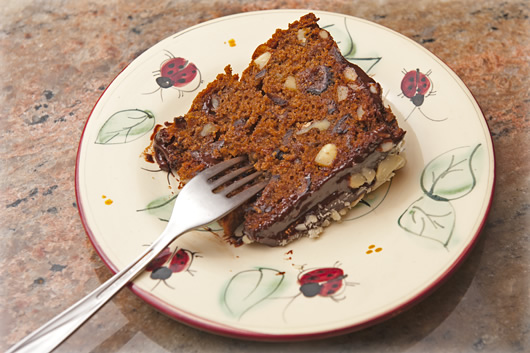 A slice of Holiday Fruitcake! 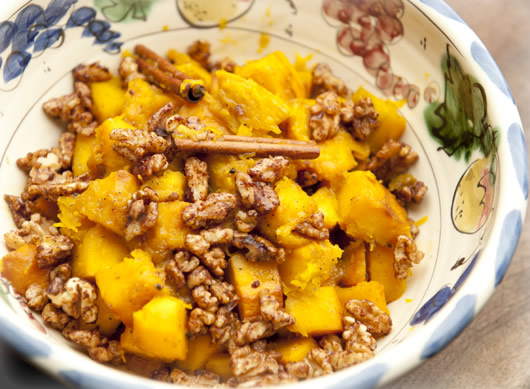 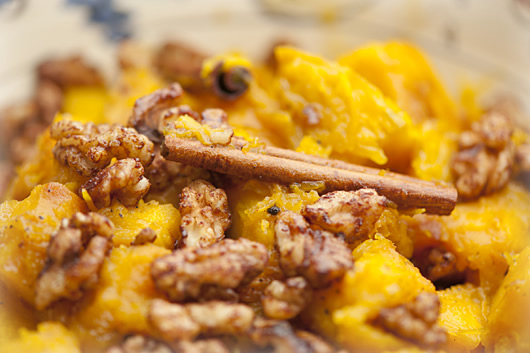