Frey Organic Wines Win at the 2009 All Things Organic Show

Frey Organic Wine wins the People’s Choice Award for Best Organic Red and White Wine at the 2009 All Things Organic Show!
Thank you to all who voted for our 2007 Cabernet Sauvignon and 2007 Chardonnay.

Hosted by the Organic Trade Association, the 2009 All Things Organic Show took place in Chicago at McCormick Place on June 17th and 18th, 2009. Attendees participated in the largest Trade Show in the United States dedicated to organic products and the well being of the organic industry here and abroad. Speakers included Phil Lempart, the Supermarket Guru and Kathleen Merrigan, USDA Deputy Secretary of Agriculture. Thanks again to all of those who participated in the award and cast your vote! 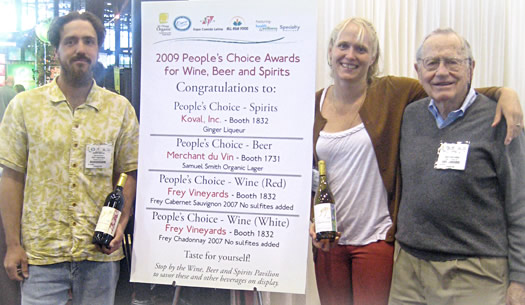 History of Pinot Noir & Chardonnay – Wines of a Family

Over the course of history, all favorable grape varieties have been selected and cloned from wild vines.To reproduce a desirable grape, new plants are made from cuttings. All established grape varietals grown today were cloned from individual seedlings that people favored centuries ago.

Pinot Noir and Chardonnay share a parent grape, Gouais blanc, which is believed to have originated in Croatia. Seldom grown today, it is an important ancestor of many French and German grape varieties. Pinot Noir has been cultivated since at least Roman times and is believed to be only 1 or 2 generations removed from its wild ancestors in northeastern France or southwestern Germany.

Pinot Noir is one of the parent varieties of Chardonnay, which originated in the Burgundy region of France, from 700 to 1,700 years ago. Our 2008 Organic Chardonnay white wine is the perfect balance of fruity aromas and light French oak and pairs well with grilled fresh veggies, chicken and fish. It also tastes great mixed with a little sparkling water and ice cubes next to a plate of cheese and fruit – a favorite after-work snack for our office staff.

We source our top quality organic & biodynamic Chardonnay grapes from family-owned organic vineyards as well as from expert grape growers of the Ukiah and Redwood Valleys. The 2008 organic vintage combines the rich flavors of these two terriors. Our long established relationship with these growers, many whose families have been farming in our area for multiple generations, ensure excellent wines year after year.

Long prized in Europe by the upper classes for their superior quality, both Pinot Noir and Chardonnay arrived in California in the mid 1800’s. Traditionally grown in cool areas similar to Burgundy, both are now widely planted due to their popularity and adaptability to different growing regions. Today California boasts the largest acreage of both Pinot Noir and Chardonnay in the United States, with a variety of styles to mirror our diverse landscapes and microclimates.

We hope you enjoy our versions of these two amazing wines, crafted with care from 100% organic fruits, with no sulfites, preservatives or other additives. 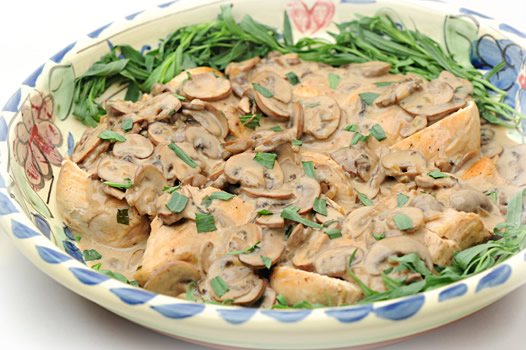 This elegant chicken dish is easy to prepare and never fails to impress. It’s a versatile recipe that tastes delicious with potatoes, rice or pasta. Serves 4-6.

Rinse the chicken, pat dry, and season with salt and pepper. Add the oil to a large skillet and cook the chicken over medium-high heat until golden brown on both sides (about 15 minutes). Remove chicken and set aside.

Next, lower heat to medium and add 1 tablespoon butter, the minced shallots and tarragon. Sauté, stirring frequently for about a minute. Add the sliced mushrooms and increase the heat to medium high, stirring occasionally until they appear medium to dark brown in color.

Push the mushrooms around the edge of the skillet and return the chicken to the center of the pan. Pour the wine over the chicken, and adjust heat to simmer lightly for 5-7 minutes, depending on thickness of chicken.

Meanwhile, mix the cream, arrowroot and mustard. Turn the chicken, pour the cream mixture into the pan and simmer lightly for another 5-7 minutes. Serve immediately. 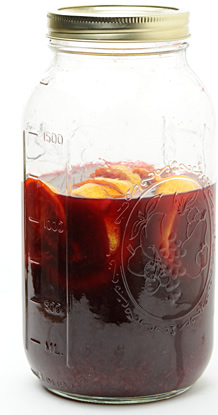 This may be the most refreshing way to drink red organic wine during these hot, summer months, a favorite from Spain and Portugal. It’s a real crowd-pleaser, too -- so feel free to double or triple this easy recipe, as needed. Just keep in mind that once made, you’ll want to chill from 2 to 6 hours before serving. One bottle serves about 5.

Wash fruit thoroughly.  For each batch, slice the lemon and 1 of the oranges and place in your pitcher or jar.  The sangria pictured here was made in a large canning jar. Sprinkle with the sugar, and mash into the fruit with a wooden spoon until the sugar is dissolved.  Add the juice of the second orange along with the Triple Sec. Then add the wine and stir.

Place in the refrigerator to chill.  The longer it sits, the smoother it will taste.  When ready, serve over ice and enjoy!

They say “a swarm in May is worth a bale of hay,” and working on the farm, I know the value of both! Last February I attended the Honey Bee Symposium at Sommerfield Waldorf School, where renowned Biodynamic beekeeper Gunter Hauk discussed the loving being that is the honey bee, with a panel of Northern California apiculturists. I left the event with a keen desire to build my own hive as a sanctuary for the honey bee. On my quest for a hive design I came across work being done internationally with the “top bar” model, which utilizes the bottom half of a hexagon (the shape the bees draw in wax) as the principle structure. Because of these dimensions the bees are able to draw honeycombs in perfect, heart-shaped arcs, as they would naturally do if they were not impeded by man’s engineering. My husband Daniel and I created two such hives using wax to seal cracks. We added features of which we hope the bees will be able to regulate themselves, such as really small ventilation holes that can be filled with propolis as needed. 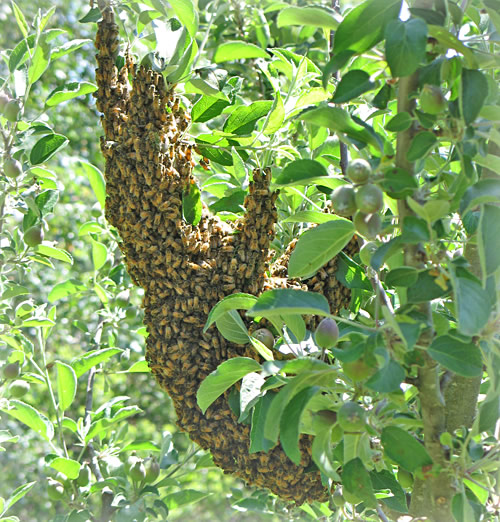 Katrina and Marie, on their respective Melissa quests, have found a Biodynamic hive popularized in Germany that has similar aspects to a top bar hive, but with some fancy features added. Called the “one-room-hive” (in German: “Einraumbeute”), it includes such additions as a waxed cloth that can be kept over the hive while one works with the bees, to minimize the disruption of opening the hive. Additionally, these new models offer observation windows to watch the queen cells as they develop. (Knowing the mature cell dates are important in Biodynamic beekeeping, which allows the hive to swarm, as Hauk describes, for the joie de vivre the bees experience). Beveled frame edges, a special insulation layer, and dove-tailed carpentry make these hives a special gift to the bees. 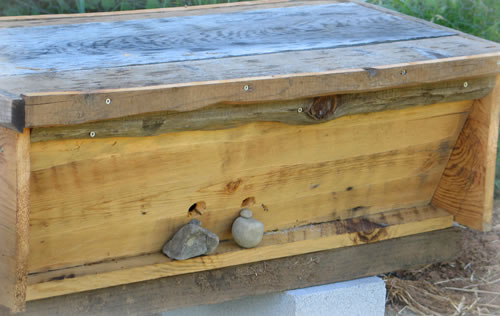 In late May, Katrina and I journeyed down to a local organic beekeeper’s apiary in Healdsburg and collected our bees in the twilight. We brought all of our unconventional hives with us and shook the bees in, all 40,000 of them per hive. With a total of 4 hives in the back of the car, it was over 100,000 bees buzzing as we made our late night sojourn home. Suited up in full regalia, just in case, we unloaded our sweet vessels on the Frey Ranch under the midnight moonlight. 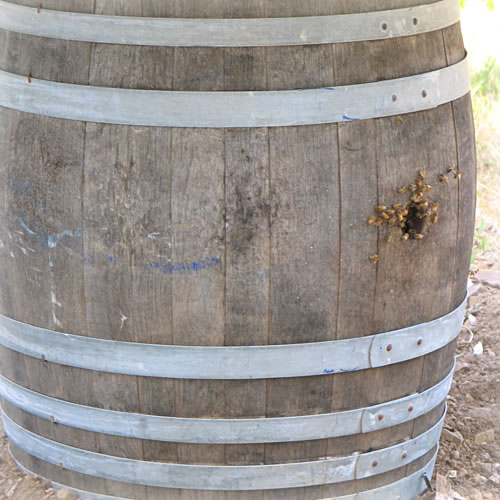 The next morning, at the break of dawn, our bees found their new foraging grounds on the ranch. Daniel’s bees got a little disoriented and decided to swarm. Luckily, they opted to settle into a nearby apple tree in our orchard. We were able to catch them again and put them back into their hive, after which we made some improvements on the design. Katrina’s bees decided to swarm too, and it was quite the climbing expedition to recover them high up in another tree. Katrina and Marie caught another swarm, and this one decided to make its home in a wine barrel. Now, at the beginning of July, all the hives are blissfully buzzing away, gathering sweet nectars from the summer garden blooms.