A Hum in the Air 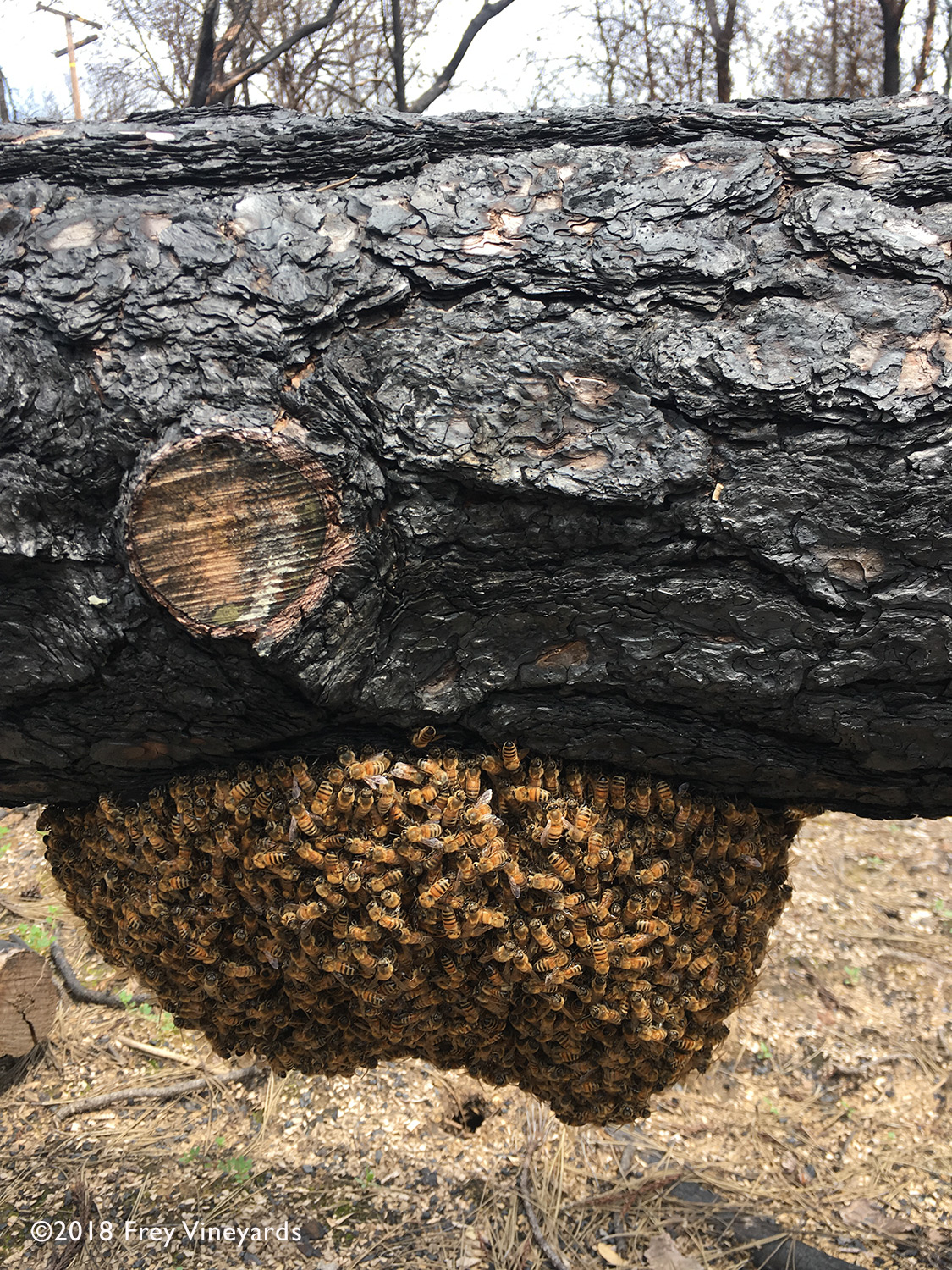 Sunday, April 22nd, was a gorgeous spring day at the Frey Ranch, graced with abundant wildflowers bursting from the scorched earth.  Eliza was jogging along a trail and heard the hum.  She followed it to a huge swarm of bees hanging underneath a burned Douglas fir log. Little Freylings Bo, aged six, and Yeshua, aged five, and Grampa Jonathan were the guardians of the swarm for two hours while Katrina and Carolyn scurried to gather bee suits, a cardboard box with a secure lid with holes punched in for air, and a custom bee brush to softly sweep the swarm into the box. Just as we walked up with our equipment, the swarm decided to move on.  We were so disappointed, but our veteran beekeeper, Carolyn Brown, hoped we would get a second chance.  We followed, jogging between charred trees with craned necks, keeping the swarm in sight, and it soared higher and higher.  Carolyn told the boys, "Old-time beekeepers used to bang on a pot to bring the bees to earth." And voila, a few yards away we found a little cooking pot lying in the burned dirt.  Bo began to rhythmically bang on the pot and within thirty seconds the swarm tightened up and drifted down to earth!  The bees settled on a low oak tree branch and five minutes later we had a healthy new colony to bring home.  The boys were thrilled and we added the magical pot to our box of bee equipment.

If all is going well within a hive in the springtime, the bees find themselves bursting at the seams with overpopulation.  Then the mysterious collective wisdom of the colony signals that it’s time to "give birth" to a second colony.  The worker bees fashion special queen rearing cells and the reigning queen lays eggs in them.  The embryo queens are carefully tended and fed a royal jelly.  Just before the new queens are due to hatch, a powerful agreement between all the bees triggers half of the population to fly out into the world in a great swarm to seek a new home.  The old queen goes with them and is carefully protected in the center of the swarm.  They will land on a tree branch, fence post, or a gnarled Cabernet grapevine (see below), and send out scouts to find a good site.  Bees have only two to three days to find a new home after they leave their mother colony.

They sometimes settle into less than desirable locations for their new hives.  Statistics show that fewer than twenty-five percent of swarms survive their first year.  If you are a lucky beekeeper, you will have a chance to capture a swarm and provide a secure home for it.

In the coming days we have been blessed with four more swarms of honeybees.  We hope that by housing them in clean, well-made bee boxes, they will thrive.  If nature provides a steady stream of flowering plants, the honey crop in the fall should be abundant enough to feed the bees through the winter, as well as provide some honey for our friends and family.

If it's a light crop, we never extract honey, but instead leave it all for the hard-working bees.

After our new bees are settled in and the queens begin laying again, we plan to move one hive to our new winery site.  Honeybees will play an important role in the pollination cycle of the gardens and native plants that will surround the new winery.  Please come and visit the bees when our new tasting room opens in the fall and discover more about nature's gift of the honeybee.

Several insecticides that are harmful to bees will be banned soon in Europe.  You can help make it happen in the U.S. as well. 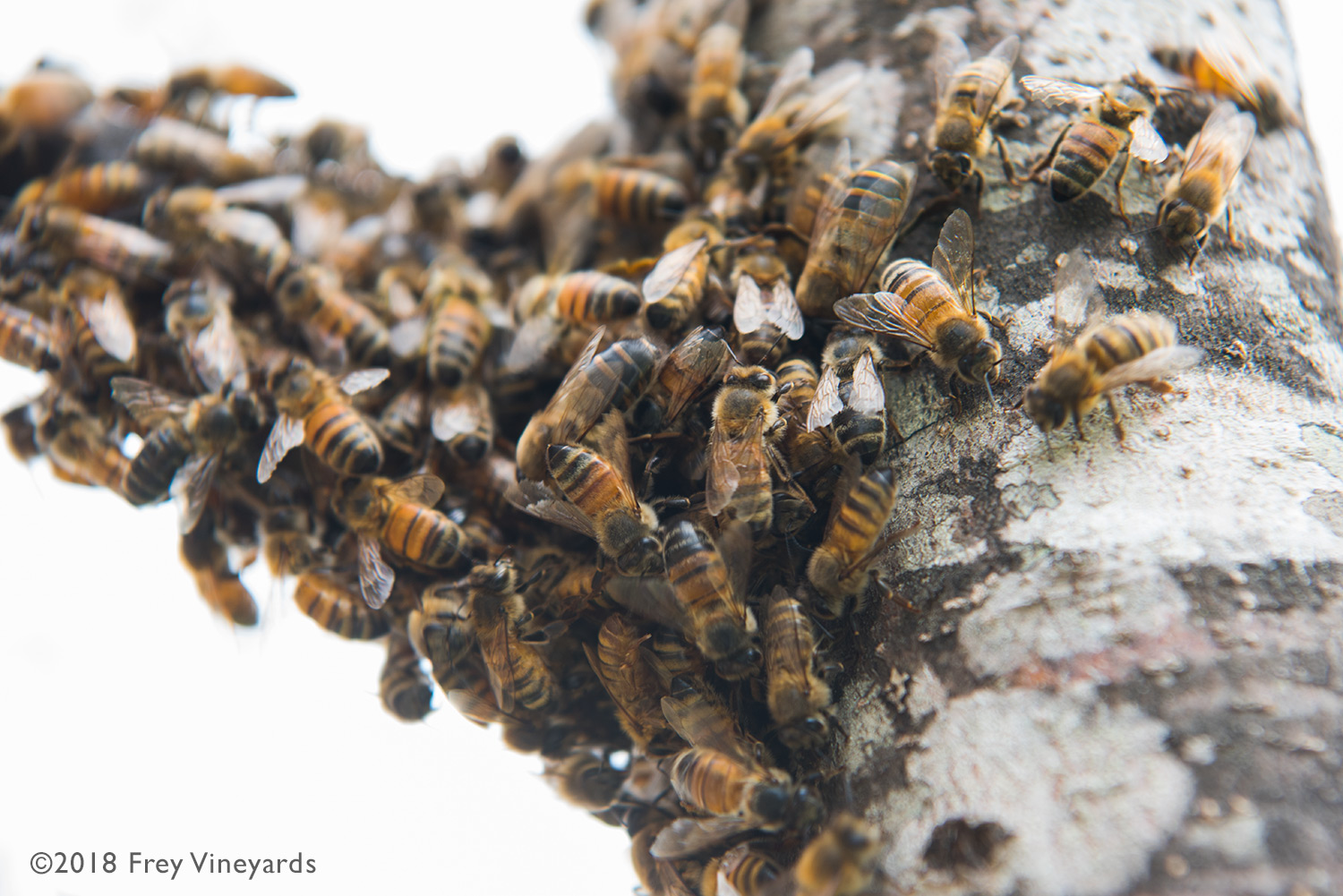 Part of a honeybee swarm on an apple tree. 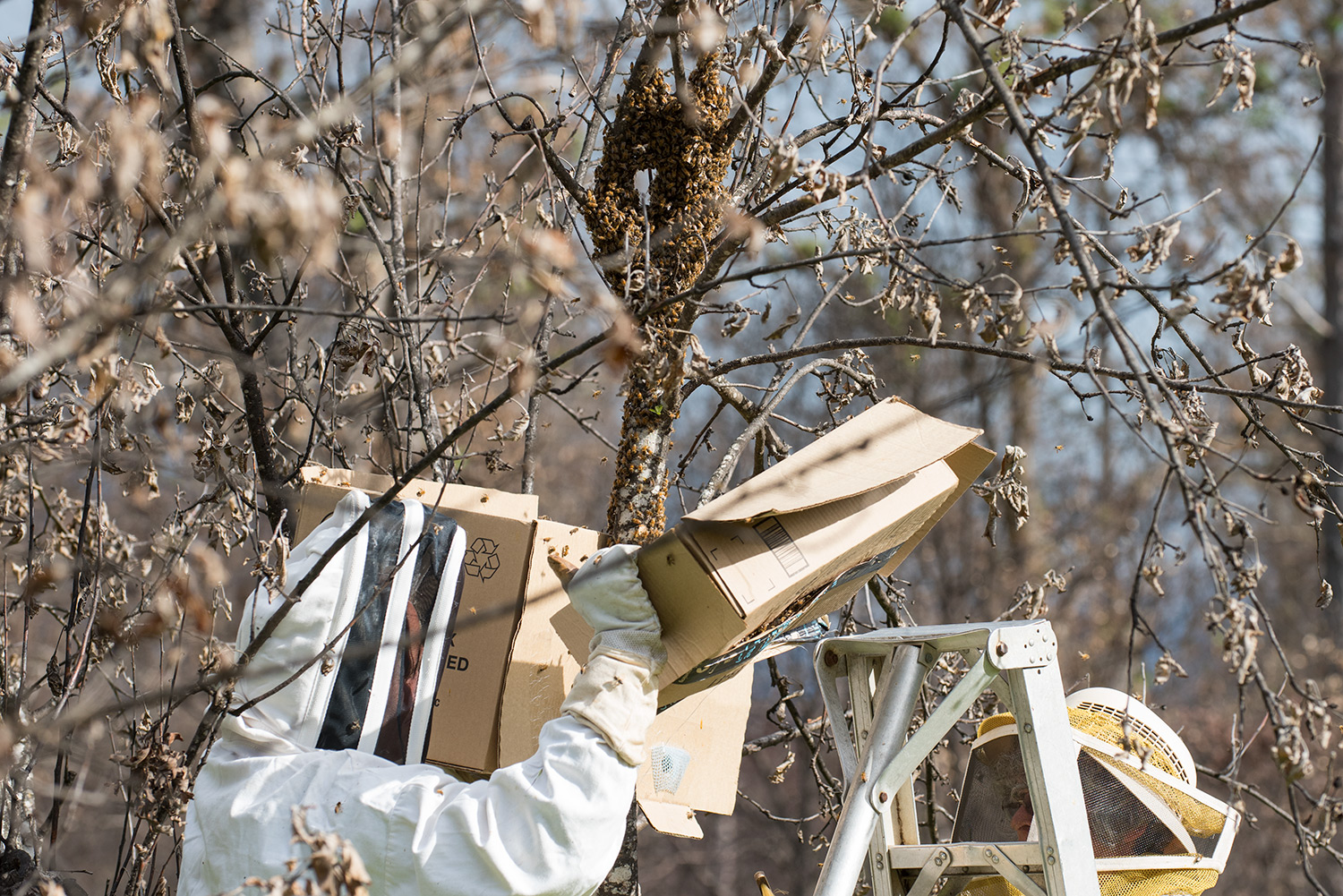 Katrina and Carolyn under the gathering swarm. 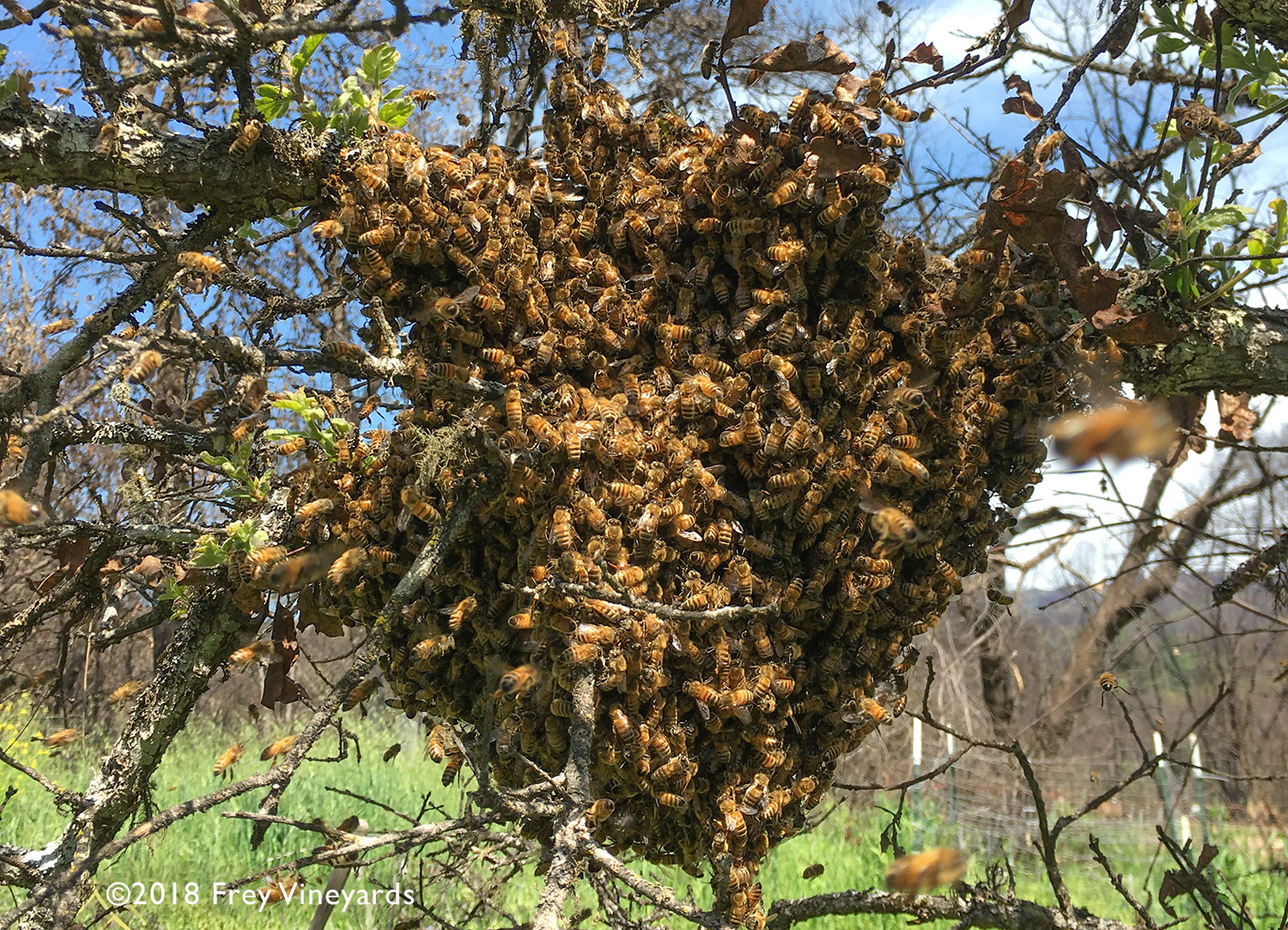 A swarm in an oak tree. 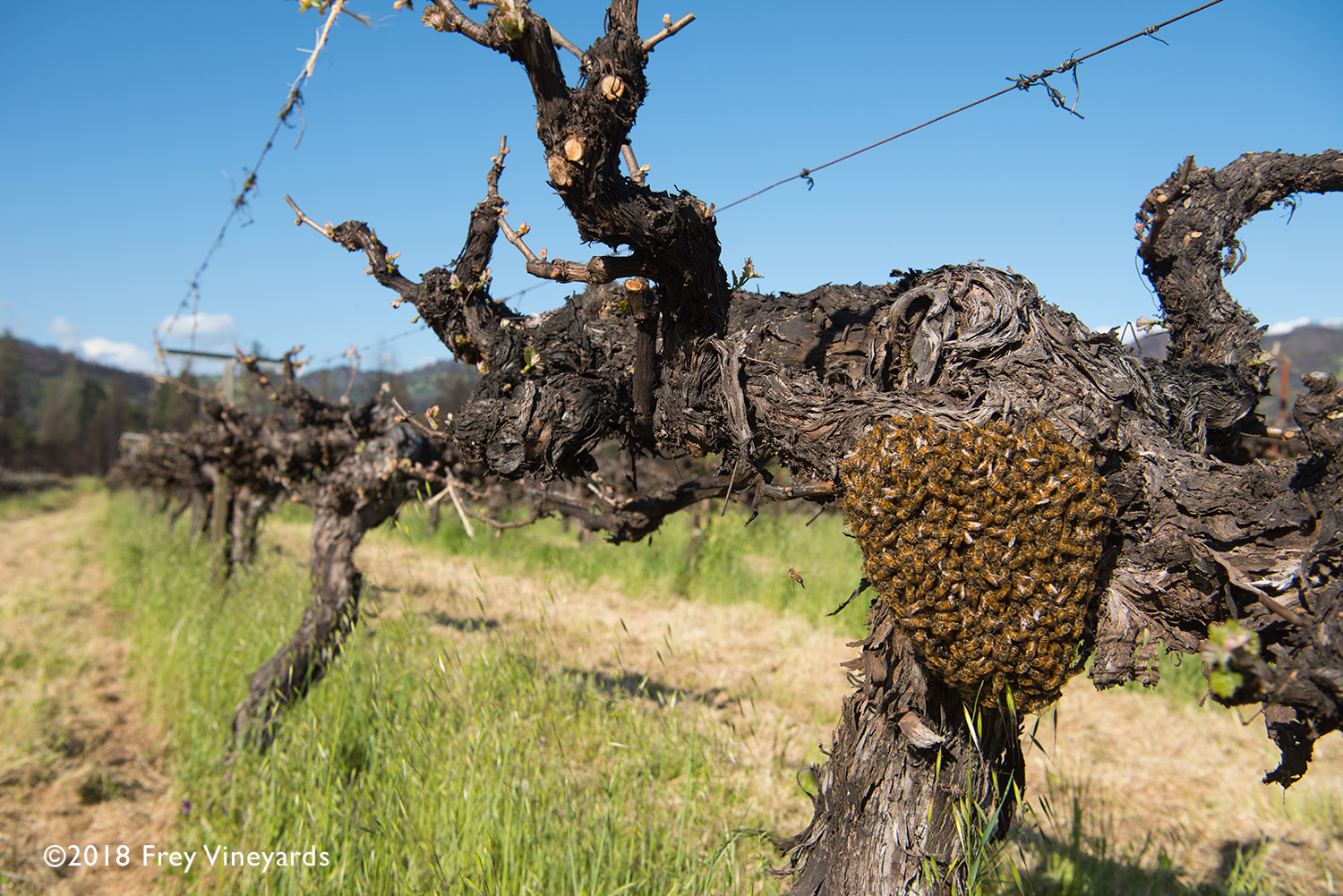 This swarm chose an old Cab vine while scouts looked for a new house site. 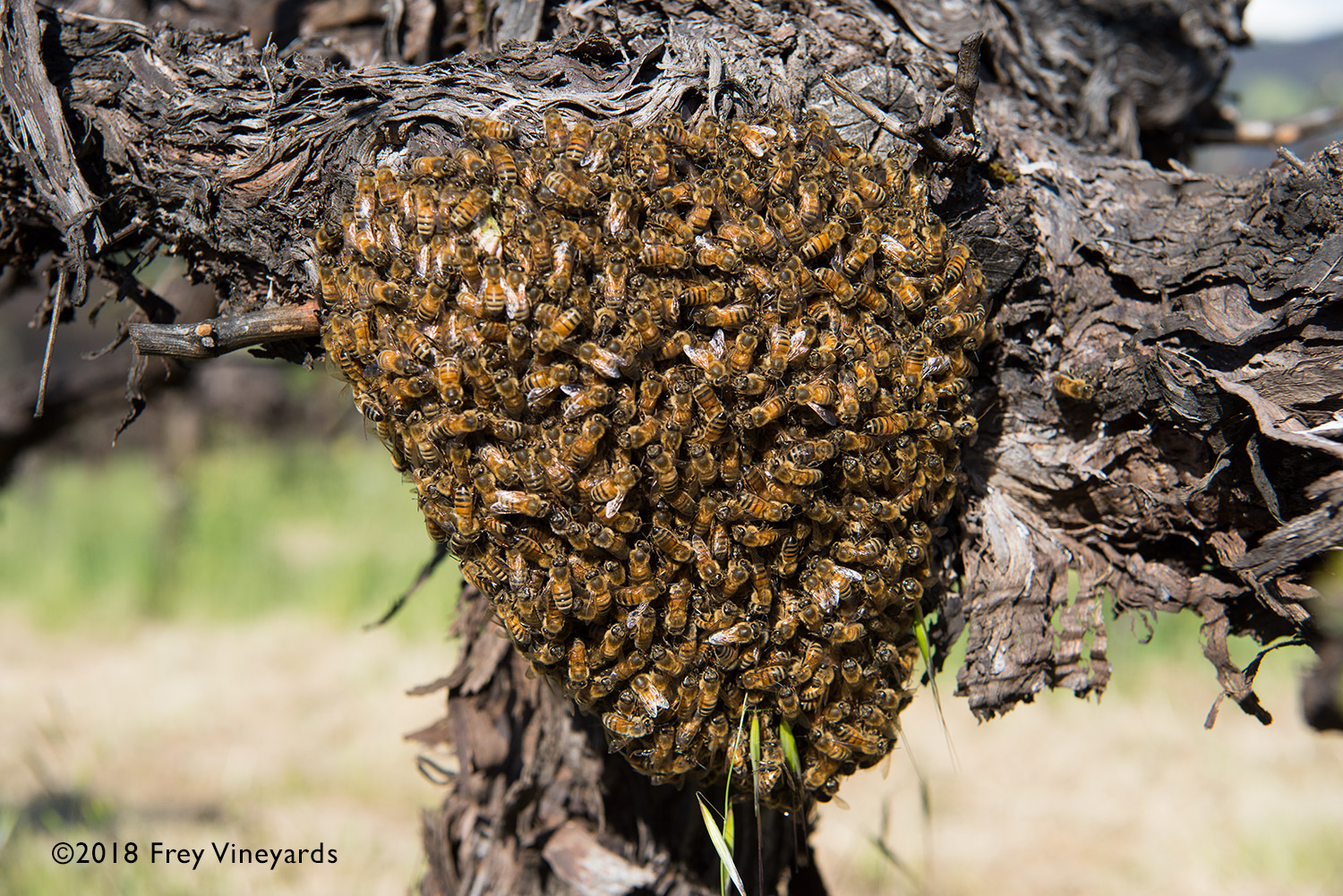 Hanging in the Cab vine while scouts search for a home. 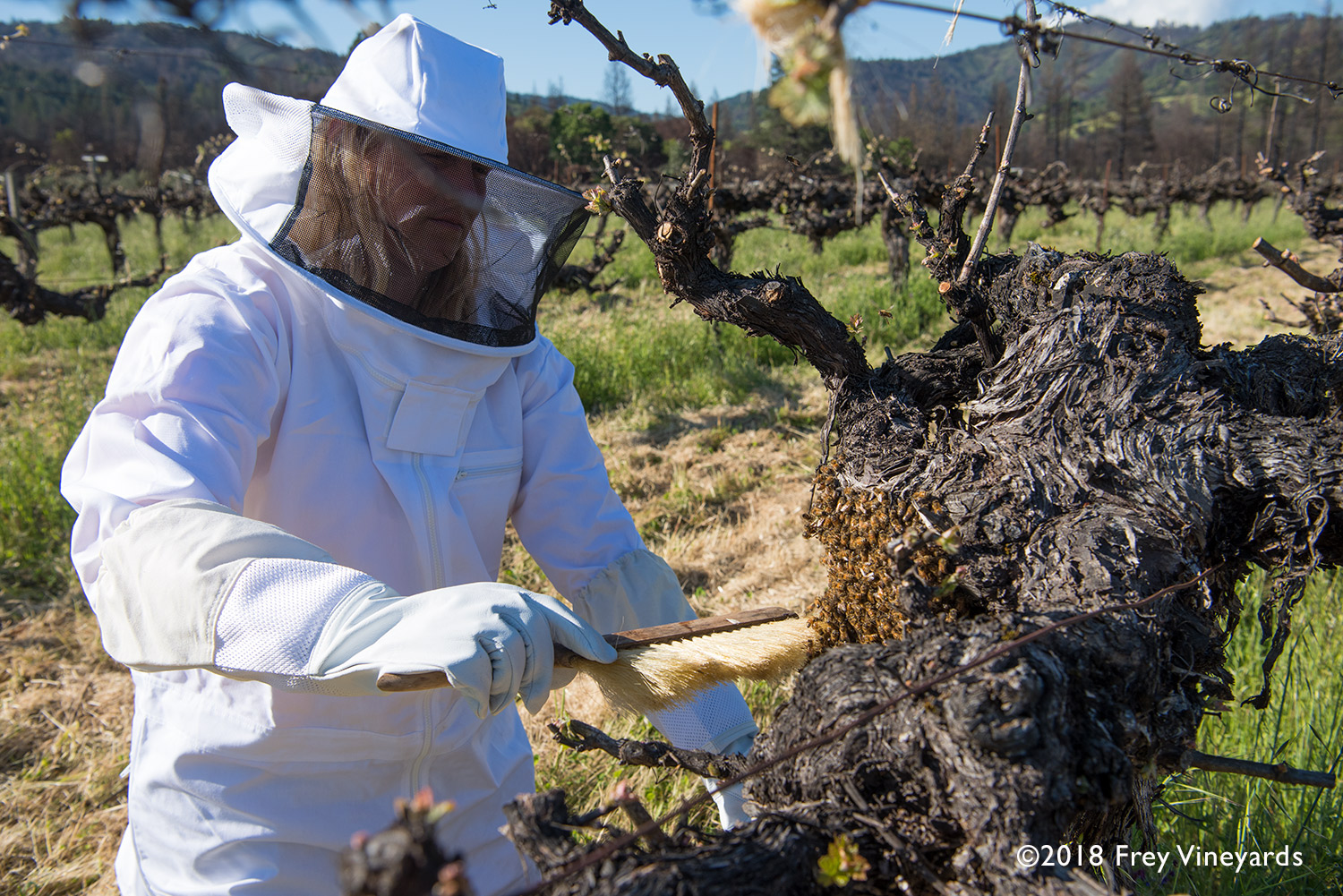 Eliza Frey softly brushes the swarm into a box. 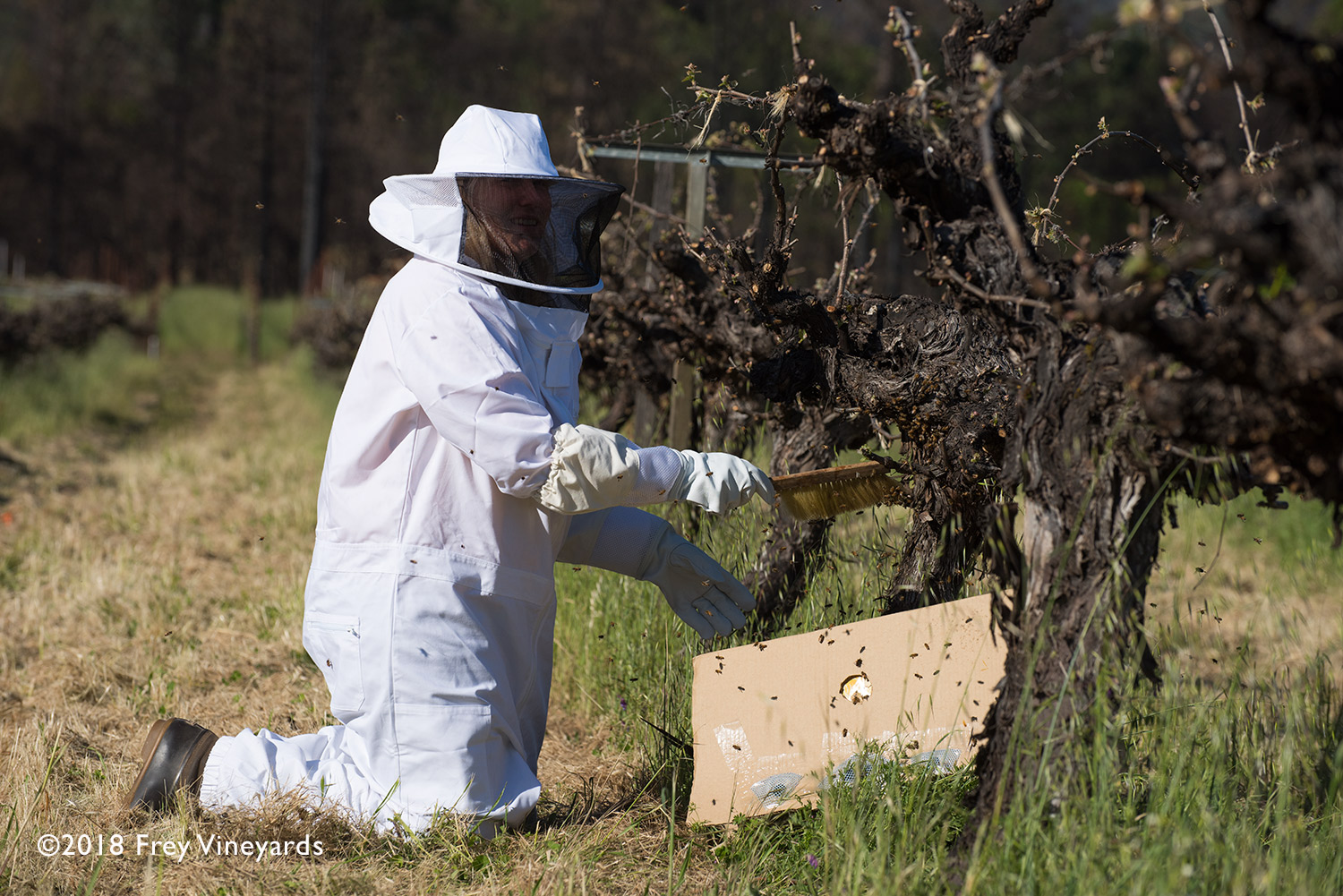 Into the box and later a better hive. 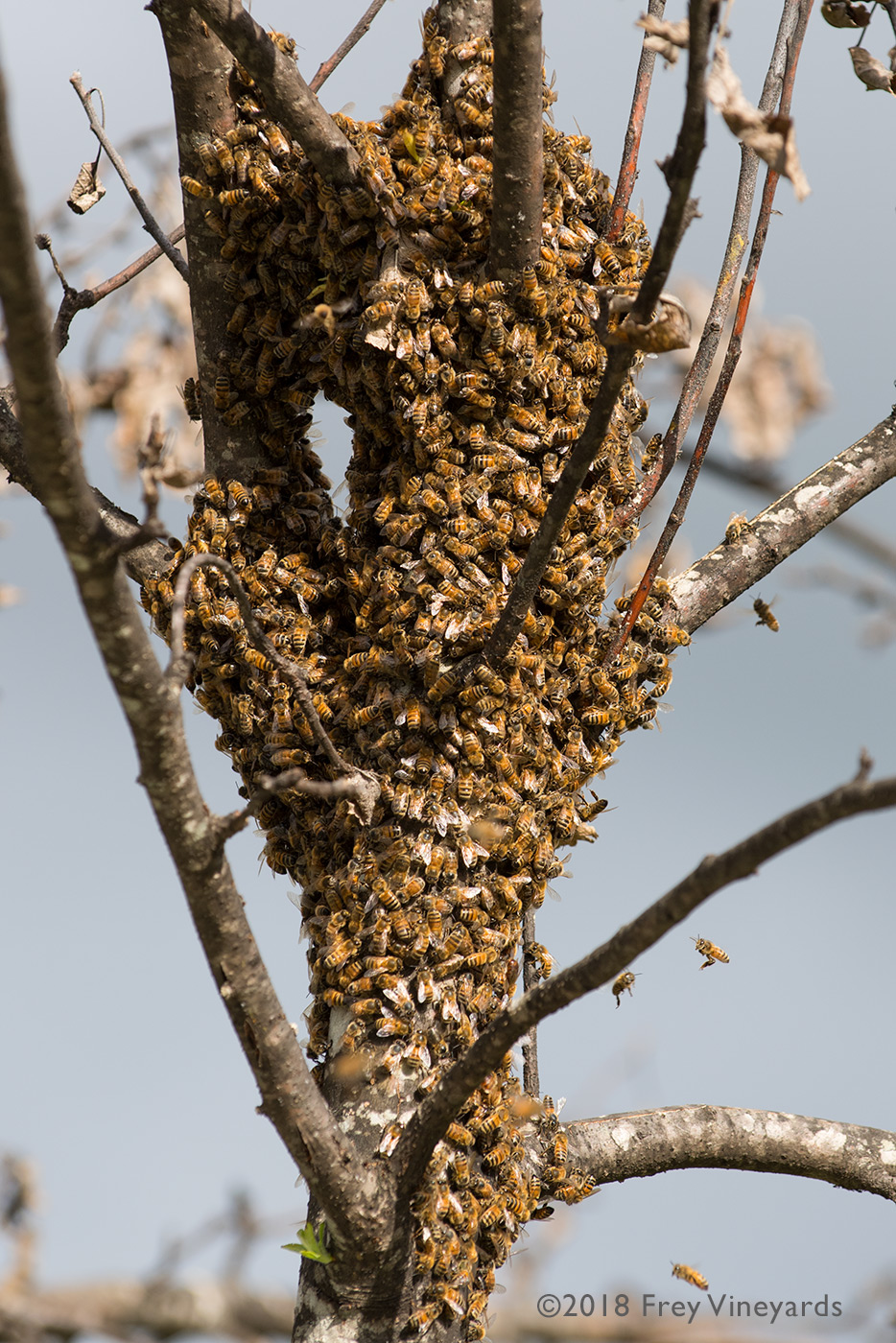 A smaller swarm in an apple tree.