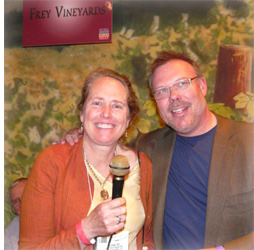 After a winter of curing, we have our first batch of homegrown, home-brewed olives, just in time for the Spring Equinox!

We harvested these olives last fall.  The trees were planted several years ago along the edge of our biodynamic Cabernet vineyard.  Most of the fruit hung in shades of green, some with accents of red and black. The olives filled two large 5-gallon glass carboys, along with an assortment of tenacious stems and leaves. 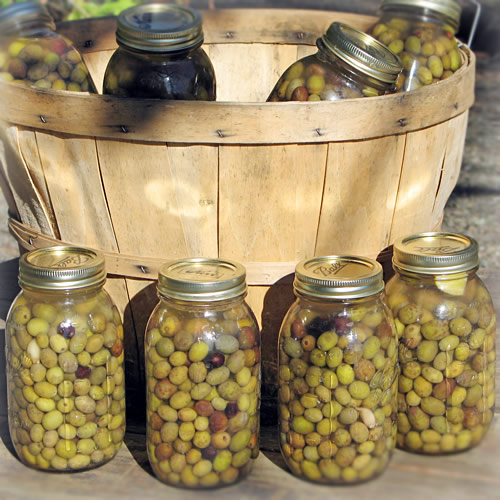 To leech out the bitterness, we rinsed the olives in fresh spring water from last October until the new year.  Then we cured the batches by adding garlic, lemons, and salt. Several brines later, we bottled the olives and delivered them to the community.  They made great table olives.  The year before last we pressed our olives and had our first run of homemade olive oil, which we’ll talk about in a future post.

New kids on the block

Since my last post we've welcomed two sets of triplets and one set of twin kids to the goat barnyard.  Over three days our three does took their turns birthing and tripled our population of four into twelve! Their Nubian billy-papa has endowed them all with long, floppy ears, and when they run, they look like they're flying with wings sprouted from their heads. 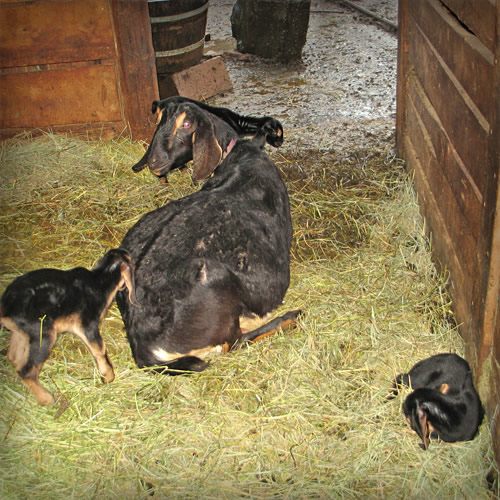 First "Rosemary," our pacifist Nubian momma, gave birth. Her babies have the longest ears, and are fully Nubian.  Next, the Oberhasli "Sequoia" spent a long, stormy night laboring with her babies. After some help rearranging the presenting triplets from Lily and Luke Frey, she happily delivered triplets with shorter, floppy ears.  Lastly, "Rosemary's" daughter, "Jasmine,” who is part Nubian and part Alpine, squirted out twins almost unbeknownst to us (we were still recovering from the late night midwifery with "Sequoia"). She did start hollering a little louder than usual though, and finally we realized that she'd just given birth to mid-sized floppy eared twins.  All the pregnant goats have their babies now, and we're looking forward to making our first batch of goat cheese since we dried up the herd (or stopped milking them because they were pregnant and ready to deliver soon).

My own child, Osiris, who will turn two in May, delights in playing with the baby goat herd. He fancies himself an honorary goat-human liaison, since he witnessed the births and has established an intimate connection with the kids. If we allowed it, I think Osiris would move in with the goats! 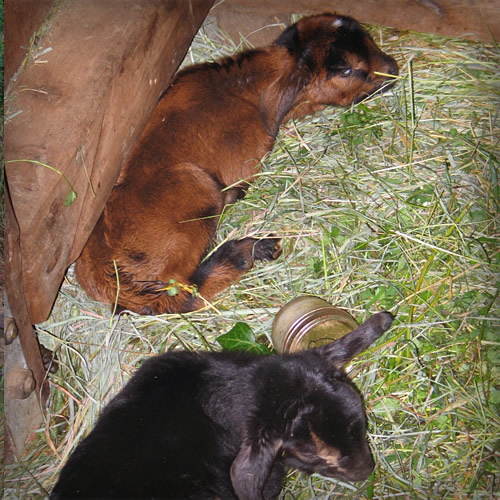 Welcome to the Frey Farm & Garden Blog. Our first posting!

Welcome to our Farm and Garden Blog! We hope you will join us through the seasons as we share with you the joys and pleasures of our biodynamic farm and family gardens – along with our methods and techniques of sustainability.

This spring we are enthusiastic that we'll soon receive a loving bundle of kids and calves. Our goats are due to kid as early as this week! The cows are more mysterious about exactly when they conceived (they were with a bull for a long courtship). Since the births are on the way, we wanted to add information about the herbal indications for new mothers.

As a general uterine tonic during the pregnancy, and especially near the end, it’s recommended to give them whole raspberry leaf to help prepare the mothers-to-be for their successful births.

Once the babies are born, it’s nice to give the mother a restorative tonic: a handful of fresh ivy (a bigger handful for bigger animals) along with a bowl of warmed water mixed with molasses. This helps the new mother by keeping up her energy levels while she cares for the newborns and lets her milk come in.

Being sure that the calves and kids get enough colostrum from their mothers in their first days, it’s also likely that the dairy animals with have extra for humans; this rich "first milk" is full of essential nutrients for man and animal alike.

May the spring be fertile and full of life for one and all, as the sunlight returns to greet the blossoms of red clover in the vineyards.