Frey Vineyards likes to offer customers a wide range of organic and non-sulfited wines.  Among other things, this has led us into producing both Syrah and Petite Sirah wines.  The similarity in the names leads many to lump them together.  In reality they are distinct varietals with unique histories, characteristics and flavors. 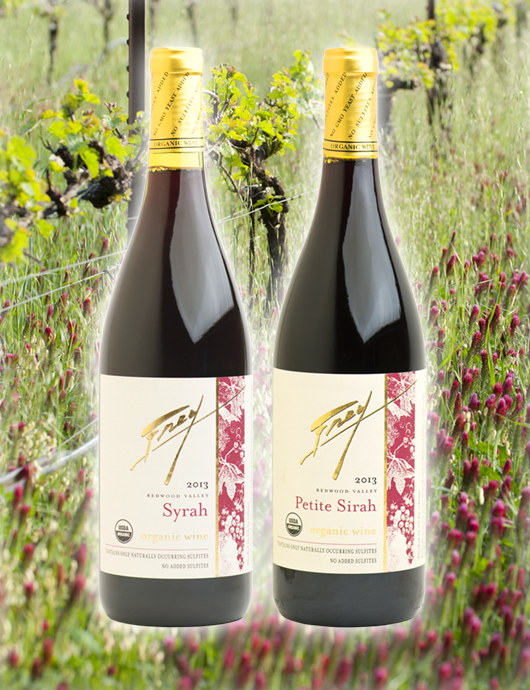 Syrah and Petite Sirah are both technically French Rhone varietals but Syrah enjoys a much richer and storied history.  Syrah is one of the parent grapes of Petite Sirah, and one of the most widely planted French varietals, while Petite Sirah, although developed in France in the 1860’s, is almost non-existent in Europe!

Syrah is a Noble grape variety and firmly rooted in French winegrowing.  Its origins are ancient and legends of its beginnings abound.  Syrah may have been referenced by Roman philosopher Pliny the Elder.  Some believe it was brought to France by a crusader returning from his journeys and planted in Hermitage, one of the regions famous for its Syrah wines.  DNA profiling in 1999 found Syrah to be the offspring of two obscure grapes from southeastern France: Dureza and Mondeuse blanche, grown for at least 2,000 years.  Syrah is a primary component of Côte du Rhone and Châteauneuf-du-Pape blends in France.  In Australia it is Shiraz, the most cultivated grape Down Under.  Syrah is the seventh most planted grape in California.

Flavors and styles of Syrah are greatly influenced by climate and growing conditions.
French Syrahs are known for subtle flavors of leather, tobacco and “animale,” an almost indescribable flavor hinting of animal, sweat, man or raw meat.  Yum!  Australian “New World” Shiraz wines are fruit-forward, spicy and full of jammy plum flavors.  California Syrahs vary depending on growing region, and here at Frey Vineyards our winemaker Paul Frey always says it is his favorite to work with.  Our Syrahs offer a marriage of the two styles: full-bodied, with forward plum juiciness and a subtle finish of rich earthy tobacco and chewy tannins.

While Syrah and Petite Sirah both made their way to California in the late 1800s, original plantings of Syrah were wiped out by the root-eating Phylloxera louse and weren’t reintroduced until the 1950s.  Syrah has gained wide acceptance and is now a common grape, still far behind Merlot and Cabernet Sauvignon, but with over 7,000 acres in production.  Petite Sirah plantings in California are older than most other varieties, but it is not widely planted with only an estimated 2,500 acres today.

Unlike Syrah, the origins of Petite Sirah are clear.  Petite Sirah was originally named Durif for the viticulturist Francois Durif whose nursery first produced the grape in the 1860s.  Durif was bred from a nursery cross-pollination of the noble Syrah grape and Peloursin, an obscure varietal that is now almost extinct in France.  For the first century of its existence Durif was seen as nothing more than a useful grape for strengthening weak blends, as it has lots of tannins and color and good acidity.

Durif made its way to California in the late 1800’s where the name Petite Sirah gradually overtook Durif, due to the fact that it is generally less vigorous than Syrah and the berry size is smaller.  Local Mendocino County growers commonly refer to their Petite Sirah blocks as their “Pets.”  The high skin to juice ratio makes Petite Sirah an inky and full-bodied wine, relatively high in acid with characteristic spicy and peppery tones. Here as well, it was a blender, a common component in field blend plantings where vineyards are planted out to several varieties that are harvested, fermented and aged together.  Petite Sirah was not yet embraced as a varietal wine in its own right.  That changed in the 1970s and 1980s when California was a hotbed of winemaking innovation and experimentation.  Winemakers began to prize Petite Sirah for its unique flavors and cellaring ability and it is now grown throughout the state.  In the last fifty years, the grape became more established in the hotter climates of California, Australia, Israel and Mexico than its native Europe.

Frey Vineyards’ Petite Sirah is grown in a relatively cool section of our Redwood Valley Home Ranch, with afternoon shade and cool breezes blowing down the Enchanted Canyon of Mariposa Creek.  Our Petite is medium-bodied, with a subtle herbal bouquet, plum and blueberry flavors, and a lingering tannic finish with a touch of spice.

Syrah or Petite Sirah are both well adapted to our hot and dry climate in Inland Mendocino.  They are full-bodied rich wines with lots of flavor and color.  We encourage you to explore their uniqueness and similarities and look forward to many more vintages of each of these outstanding wines!