Report from the Vineyard

After a near perfect growing season for the second year in a row, the 2013 grape harvest began fast, furious and early.  The first grapes came through the crush pad on August 27th, about 2-3 weeks earlier than usual.  Then an exceptionally warm and dry autumn stretched the harvest out for 10 weeks until the final load of grapes came in on November 4th!  The first and last grapes to pass through the crusher this year were Chardonnay, often the first varietal to be wrapped up.  In 33 years of winemaking at Frey Vineyards this has never happened!  Every year is different and 2013 was no exception. 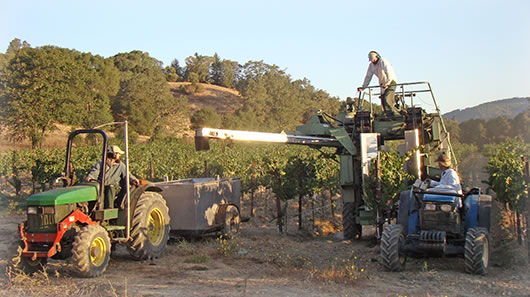 Although we had our average of around 50 inches of rain this year, it fell in an abnormal pattern.  December 2012 gave us some near flooding rainfall to contend with and we were anticipating a typically wet January 2013 as well, but it barely rained.  Next came February, then March, then April, then May.  With less than 6 inches of rainfall going into June we were expecting a California drought-like summer, and that is exactly what we got.  Wild weather events included a little storm in June, a thundershower on 4th of July after seven days of 100+ degree weather, no rain in August, and an unusually wet storm at the end of September.
Not only was 2013 much drier than usual, it was quite a bit hotter as well.  We saw numerous April days in the 90’s.  May was next to normal aside from a rogue frosty night on the 28th that nipped the tender flower clusters in some Syrah and Merlot vineyards.  June had six days that broke 100 degrees plus another eight days in the 90’s.  The dry, windy 111 degree day on Saturday the 8th of June was especially devastating for our Cabernet Sauvignon grapes.  The delicate grape flowers were just beginning to set berries, and in some fields we actually watched them falling off in the breeze.  The fruit simply got cooked in the heat.
After surviving 17 days between 100 and 112 degrees in July the vines enjoyed a relatively mellow August in Redwood Valley.  With all the stress associated with the dry heat we began to see veraison (grape color change) in mid-July as opposed to early August.  We had to kick it into high gear to prepare for an early and potentially fast-paced harvest.  We had just completed installing irrigation and planting almost 16 acres of new vines in three different fields when harvest began with a bang!
The first weeks in August were full of activity.  We harvested white grapes in the wee hours of the morning to bring them in cold for optimal whole cluster pressing.  We spent time working out the mechanical kinks in the equipment and started the process of visiting vineyards to test sugars and acids and lay out the harvest schedule.  Everything seemed to be happening at once, but then the weather shifted.
Despite two wet storms in September, October provided near perfect fall ripening conditions.  We let our red grapes hang until they were fully physiologically ripe, perfect for organic, low intervention winemaking.  With the good weather the sense of urgency lessened and we had one of our longest harvest seasons. It started early and stretched into a slow, lingering finish after 69 days.  The wines are still young but are tasting great!  We look forward to a great vintage with outstanding quality.  Get ready for some delicious 2013 wines.  Cheers!